Rebel Without a Cause by Nicholas Ray (1955)

Some films are called classic masterpieces for a reason. And this is one of such films.

Watching this film is emotionally exhausting. And not because the plot reminded me of my youthful times or life as a gang member. I was never a gang member if anyone cares to ask. The most powerful notion was that it felt like watching myself being 17 again and re-living my first fascination and closeness with another person my age. Of course we had our issues with ‘the folks’ as do all the three youngsters in this film. Perhaps not that extreme and perhaps we did not end up meeting for the first time at the juvenile retention, but still – the emotional phenomenon of discovering who we really are and who we want to be seems to universally transcribe  throughout decades.

James Dean, although he is 24 and plays a 17-year old (and looks a contemporary 32-year old),  carries through the magic and power of how it is to be on the verge of becoming one’s true self. He walks, moves, looks like my 17-year old counterparts back in my day. The red jacket he’s wearing (apparently the costume decision was made once it turned out the film will be shot in colour) works like a magnet and forces us to closely watch him and rarely do our eyes turn away. This is a film that needs to be watched with 100% attention as there are so many details crucial to the story, shown rather than described. Shown rather than told.

Also, Jim Stark reminded me of someone and I only realised it late into the film – my first boyfriend back at high school, even though he does not look like James Dean at all. That’s what I’m talking about. The energy, the emotions, the question marks, the will to no longer be in this place and the realisation that when you’re 17, you really are alone with your issues and surprisingly it is your first boyfriend/girlfriend who will become your ally. Not your parents anymore.

There were other films made later touching upon the same notes of coming of age but so far I haven’t seen a more successful one. 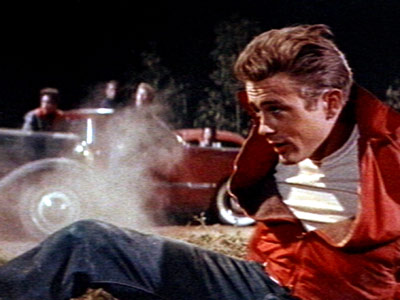