Before Sunset by Richard Linklater

The lovely sequel to the one set in Vienna – Before Sunrise.

The action opens 9 years after the events of the original film. Same actors, only Vienna is replaced by Paris.

Ethan Hawke’s character wrote a book inspired by the Vienna night and comes to Paris to promote it. Celine pops in to the bookshop and they set on a walk. Turns out the French girl did not make it to their appointment at the railstation as they had agreed as she had her grandma’s funeral to go to. Jesse did wait for about 3 days wandering around but finally gave up. At present he is married and has a daughter.

They walk throughout Paris, take on a boat to finally end up in Celine’s flat listening to Nina Simone. A lovely story beautifully lit by the afternoon sunshine. Another film happening respecting the classical rules of the unity of action  time and place. 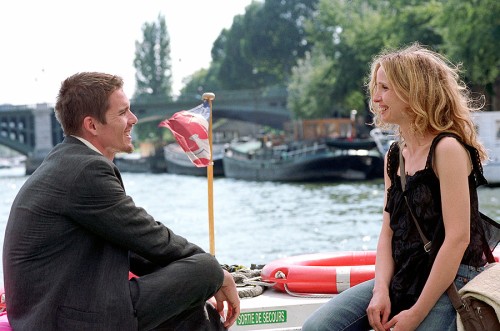 Filed under Catching Up, film reviews